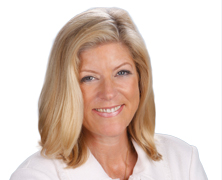 To quote Eleanor Roosevelt: “No one can make you feel inferior without your consent.” Take risks; don’t live life in the safe zone.

Start with Why: How Great leaders Inspire Everyone to Take Action, by Simon Sinek

When I was a young university student, there were two careers my father did not want me to go into: the military and advertising. Naturally I chose both. It was during my time in the former that I learned tremendous life lessons that helped me in the latter.

Upon graduating university, I embarked on a three-year program in the British Women’s Royal Army Corp., an experience that has shaped the rest of my career in many ways. The army teaches you many lessons in a short period of time, but most of all, it taught me invaluable leadership skills that I still can utilize today.

The most important lesson I learned is that respect is earned and trust is critical. As I have taken on new positions throughout my career, with increasing levels of responsibility, that lesson has been essential. Of course having the respect and trust of your manager is necessary to acquire the job, but if you want to be successful in your role as a leader, you must earn the respect and trust of your team. To be an effective leader, you invariably need to drive change. In the business world, driving change is like going into battle. It’s uncomfortable, frightening to some, and challenging. Simply put, if you are going to ask people to follow you into battle, they need to respect you and trust that you will support them.

The second lesson that I learned is that you need to inspire your team to believe what you believe. They are not going to support you just because you tell them to. It’s much more personal than that. Inspiring a large system of restaurateurs was an important first step when I joined the Denny’s team and continues to be an aspect of my role today. Communicating passion and conviction in your beliefs is the most important step to acquire support for your plan.

Lastly, everyone has a critical role. In business, much as in the military, teamwork is essential. In a system as large as Denny’s we see the importance of roles, and responsibilities play out constantly. The entire team needs to understand the plan, the rationale, and their role within it so they can make the right choices for the entire team to achieve a successful outcome. As a leader, you need to help your team achieve their full potential, ensuring each person grows professionally, which betters the entire organization. These lessons continue to serve as guiding principles in my leadership approach and I improve on them every day. I encourage you to do the same.

One of my early bosses in my career told me he hated working with women because “they always cry,” but despite his best efforts, he did achieve his goal of reducing me to tears—I always did it in the ladies’ room. There are always differences in the way men and women treat each other in the workplace, but fortunately for me, aside from this one experience, I have never felt discriminated against. The important thing I learned is not to limit yourself. Given I am often the only woman often, I very much see part of my role as representing the female perspective, but also to be an example of the benefits of having female executives in high-level positions.

I do see other women limiting themselves and I try to coach them not to do this. One of my favorite books I recommend to women that need some encouragement is Women Don’t Ask, by Linda Babcock and Sara Laschever.