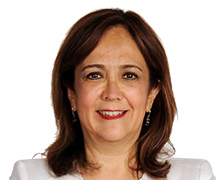 There’s never the perfect time to do anything. Don’t wait to take a new opportunity until everything is perfect, because that day will never come. Live life, now.

The Costs of Decarbonisation: System Costs with High Shares of Nuclear and Renewables (Nuclear Energy Agency/Organisation for Economic Co-Operation and Development)

Organizations and efforts that encourage people to pursue education

Stay focused on Your Goals

As a Hispanic woman working in engineering and research, people often ask me what it is like being a minority in fields long dominated by white males. My answer is that I have never known anything else, and my focus has been on who I am and what I want to accomplish, instead of what I am not.

As a child, I loved math and science, and decided to pursue a degree in chemical engineering and computer science at the Instituto Tecnológico y de Estudios Superiores in my hometown of Monterrey, Mexico. My family was extremely supportive, but not everyone was. I remember one of my dad’s colleagues saying, “I don’t know why she’s going to school if she’s just going to end up boiling beans for a guy someday.” I ignored the comment because it didn’t apply to me. I know what I am capable of, so I didn’t let it get to me. I learned that lesson early and have kept that philosophy throughout my career.

That served me well when I decided to have children shortly after earning my doctorate. I wanted to work part time, which was a struggle in a research field. People thought I needed to either focus on my career or have a family. I eventually found a position with Dr. Vandergrift at Argonne National Laboratory that enabled me to do both.

That position taught me I could be a researcher, a mother, and a member of the community. I didn’t have to choose. It also taught me what it means to be a good employee, colleague, mentor, and manager, which helped me learn how to get things done.

To successfully influence others and accomplish things, you need to build trust, be genuine, and be a role model for what you value in the workplace. To build trust, you need to respect people at all levels of an organization and listen to them. It’s also important to be genuine, and to take an interest in others and help them advance their careers. Finally, in order to influence others, you need to be a good role model by taking accountability for our own actions, persevering through hard times, and having the courage to do what is right.

This is especially important at an organization such as Idaho National Laboratory, where we are working to solve the nation’s most challenging energy problems.