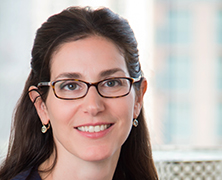 Sky is the Limit for Trailblazing Attorney

Attorney and Israeli-Austrian immigrant Dorit Ungar Black says her biggest career leap was moving to the United States and reinventing herself as a litigator in a foreign country with a different legal tradition and a language that wasn’t her first.

“The experience taught me that you can do almost anything you set your mind to and that the sky is the limit,” Black said.

She was just 35 when she co-founded Holwell Shuster & Goldberg LLP four years ago. Today, it’s a leading commercial litigation firm with about 50 attorneys. From the outset, she was a natural with the elite boutique firm in New York, having emerged as a top litigator and arbitration specialist, representing clients like Comcast Corporation, Mitsubishi Heavy Industries, and Duane Reade.

Her colleagues say she has refused to let language, gender, or other barriers get in the way of her trailblazing legal career. Black’s leadership has been instrumental in earning the firm various accolades, including Benchmark Litigation’s New York Law Firm of the Year.

She believes the most important quality a woman leader should have is the courage to stand up for what is right and to speak out against what is wrong. “Don’t doubt yourself,” she said. This belief is manifested in the clients she has represented, including the heirs to the Herzog Collection, the largest private art collection in Hungary prior to World War II. The ongoing legal action against the Hungarian government and its state-owned museums and instrumentalities seeks the return of over 40 pieces of art valued at about $100 million. The case resonated with Black, the daughter of a Hungarian Holocaust survivor.

For the last seven years, she has managed a $120 million lawsuit by a Canadian toy manufacturer against her client, a testing laboratory. The plaintiff distributed Aqua Dots, a now-recalled craft product that, when ingested, metabolizes into the so-called “date rape drug.” In her diverse practice, she has also represented Turkish conglomerate Çukurova Holding in its successful attempt to reverse the confirmation by a New York federal court of a $932 million arbitration award; a hedge fund in a dispute with a German subsidiary of Lehman Brothers over a $100 million repo agreement; as well as a dispute involving German gun manufacturer Heckler & Koch over a €100 million PIK loan.

Outside of the office, Black is a devoted mother of two. She holds a Magistra Iuris from the University of Vienna Law School and an LL.M. from Columbia Law School.