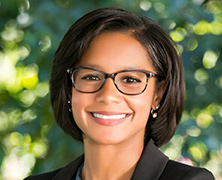 Treat everyone with the same respect and kindness you expect from them.

Born to Run by Bruce Springsteen

Cashier at a mini-golf and raceway

Every Voice Deserves to Be Heard

I believe that every perspective deserves a chance to be heard and has irreplaceable value.

I grew up as a black girl in rural, mostly white, and conservative Nevada. I loved science and aspired to one day give back to my community. Although my parents didn’t have much money, they showed us that through hard work, perseverance, and faith in God, we could accomplish anything. I regularly referred to those values going through high school, two years younger than any of my classmates and one of only 15 black students.

To say that I didn’t fit in is an understatement.

However, as I graduated with my first, then second, bachelor’s degree, I gradually became more certain that I was plodding in the right direction, even if societal cues said that black girls don’t go into science or medicine. My path was confirmed when my soon-to-be mentor stopped me in the hallway of a research building and asked if I was serious about becoming a scientist. I told him I was, and three weeks later, I was accepted into a doctoral program in cellular and molecular biology. During those three and a half years as a graduate student, I leaned again on those values of hard work and persistence and, with encouragement from my mentor, gained more confidence in my abilities.

As a freshly minted PhD, I began research in a new lab at the University of Utah, where racial and gender stereotypes became abundantly clear. Although I worked hard, offered valid scientific hypotheses, and authored several publications, I always felt that my ideas weren’t as good as my white male and female peers, and I was consistently met with greater scrutiny and criticism.

Ultimately, I decided that a career in academia didn’t fit into my life goals and entered the nonprofit world. There, I continued to feel marginalized, less valued, and held to impossible standards. Fortunately, I had sponsors within the organization who believed in me, giving me the confidence to engage and turn my curiosity in the business aspect of science into something more substantial.

Currently, as a business student at UCLA Anderson School of Management, I am learning from my talented and accomplished classmates and professors, while gaining even firmer grounding in my career as a black female scientist. In both my role as a student, and a medical science liaison at GlaxoSmithKline, my aim is to narrow health-outcome disparities between ethnic groups, while encouraging more racial minorities to pursue careers in science and medicine, so that every voice is heard and valued.