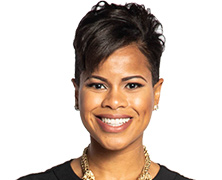 “Be the change you wish to see in the world.” –Mahatma Gandhi

Mentorship Program Student Coordinator at the University of Michigan

At Freddie Mac, we’ve been keenly focusing on the “I” in “D&I.” By further cultivating a culture of inclusion, we can better engage the diversity of our employees, suppliers, and community partners to deliver on our mission of making home possible.

We call our approach inclusive engagement—establishing meaningful connections with people unlike yourself. This concept resonates with me, particularly, as I’ve leveraged an inclusive mindset throughout my career to continuously push myself to explore and embrace new opportunities. In fact, it’s in spaces of unfamiliarity that I’ve often grown and developed the most. It’s also why some of my career advice to others has been to embrace an inclusive mindset as they seek to evolve, grow, and prosper.

As an African American woman, I’ve always been conscious of representation and why all types of diversity are important and valuable. I became more acutely aware of the importance of an inclusive mindset during college when the Supreme Court was hearing an affirmative action case at a leading university. In a nutshell, the university was accused of providing preferential treatment to diverse individuals over the majority.

I very clearly recall an encounter with a fellow student, a Caucasian male, in the lobby of one of our main buildings. He was hosting a bake sale where items being sold at a higher price to the majority were priced noticeably lower for minorities. His argument—affirmative action gives minorities an unfair advantage in the admissions process, reducing opportunity for the “qualified majority.” I disagreed with his argument and asked to sit down to discuss further, where we each shared our informed arguments. As the discussion progressed, his rationale dwindled, while mine strengthened. My concluding point was that limited mindsets can lead to a narrow view of the world.

What could have been a moment of tension was a teaching moment for us both, which ultimately led to a meaningful connection that we leveraged to drive change and foster inclusiveness across the campus.

Throughout your career, you’ll encounter people with different ideas, ways of thinking and more. An inclusive mindset is a powerful way to best position yourself to leverage and embrace diversity to ignite innovation, outcomes, and success.