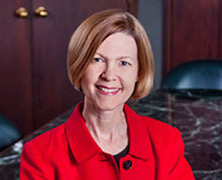 Aim for excellence and integrity in all that you do, and try to make a difference.

Rousseau has one of the leading practices at the firm, is a highly valued legal advisor to top regional, national and multinational businesses, and sits on the board of several Louisiana nonprofits. She has a positive and enduring impact on the business, educational and charitable communities of Louisiana.

Rousseau’s contributions go beyond her impressive client roster; she has helped strengthen the firm’s commitment to recruiting, mentoring and promoting lawyers from backgrounds that have been underrepresented in the legal arena. She is equally committed to serving underrepresented communities in Louisiana and currently works closely with two organizations: City Year Baton Rouge and Burkenroad Reports.

“It can be difficult to figure out how to fit in and earn the trust of clients when you are the only woman at the table,” explains Rousseau. “But with preparation, hard work, self-confidence and a constructive attitude, you can demonstrate that you are a valuable part of the team. Serving as counsel to a significant number of large, prominent companies that trust me handling their important legal matters, is a very significant professional accomplishment,” she concludes.

Rousseau says her path to leadership was guided by terrific women colleagues who served as role models and the support of male and female partners who provided opportunities to serve and succeed as a leader. She offers this message to younger women, especially new working mothers: “It will be harder than you think, but do it anyway. The world is a better place with women leaders in it.”