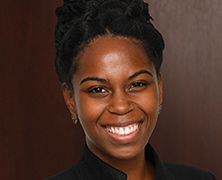 Hiking, reading, and hanging out with friends/family/goddaughter

Strive to be the person that your best friends know you to be, and that you want your future daughter to become.

How Long ‘Til Black Future Month by N.K. Jemisin; The Prophet by Kahlil Gibran

Stop Negotiating Against Yourself

The best advice I ever received was from a professor who—when I was in the depths of impostor syndrome and self-doubt, and considering withdrawing my application to a coveted clerkship—demanded that I stop negotiating against myself. People who find you unqualified will happily say no to you throughout your life, he explained; you should never take yourself out of the running by doing it for them. I found the idea of a fully preventable rejection terrifying and embarrassing. But he had never steered me wrong before. So, I sucked it up, attended the interview, and got the clerkship.

That professor has since become a mentor and friend. And I revisit his advice every time I’m faced with a challenge I’m inclined to shrink away from, an assignment I feel I’m too junior to take on, or an adversary who has more experience than I do. I remind myself that negotiating against myself only gives others an advantage. I remind myself that my colleagues, my bosses, or even something ethereal will tell me no when I stretch too far—so in the meanwhile, I might as well tell myself yes.

I try to pass this advice along as often as possible, especially to women—particularly black women and other women of color. There are innumerable sex- and race-based biases in the legal profession, ranging from expectations about who can dominate a courtroom (and what form that domination must take) to what the beauty industry says it means to look like a professional. And I would never diminish the role those factors play in professional success.

But among the things we can control are our own internalized biases—the way we discount ourselves before the race starts, while certain of our counterparts step up without ever questioning their qualifications. So just DO the thing. If you fail, you fail. (It happens to all of us, and in the grand scheme of things, I promise it won’t be nearly as devastating as you fear.) But if you say no, you never even get a shot at success.

When you do step up, do it in a way that feels authentic. You don’t have to mirror macho stereotypes to be successful. That part is easier said than done, but try to remember: being nice and cracking jokes can be more effective than being sour and combative, just like being cautious can pay off in ways that raising your hand to speak first won’t. If your work and leadership style are disarming to others, then so be it. Being authentic will just make it easier for someone coming up behind you. And it’ll make your success that much sweeter.