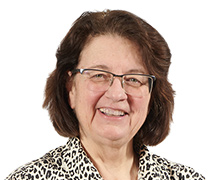 I remind myself constantly that every other person I encounter has a lifetime of experience, challenges, victories, and defeats that I cannot know, understand, or perceive without walking in their shoes. This helps me to remain empathetic, non-judgmental and (hopefully) able to focus on what we can achieve together.

Washington: A Life by Ron Chernow; When: The Scientific Secrets of Perfect Timing by Daniel Pink

Even Good Guys Have Biases

There are two issues that continue to hold women back from achieving real equality in the workplace. The most profound obstacle, in my view, is the persistent unconscious bias of male colleagues—even those who deeply believe their attitudes are gender neutral, and that they are great supporters of women.

Ironically, navigating around and succeeding despite open gender bias from men is a skill most women acquire early. We know who you are and what you think, so we just work around you. One of the trickier challenges is convincing outwardly supportive men that their bias is still there and effectively holding us back.

When you believe that you are supportive of the advancement of women, then naturally, you believe that women in your orbit will succeed because of your good thoughts and your full-throated support. Well-meaning male colleagues will always point to the few women in positions of leadership and claim victory for women (often taking credit for the achievement). The reality is that the women they are holding out as examples of equality are often in roles that are more figurehead than powerful. That is, unconscious bias is keeping women in supportive roles, still just below that glass ceiling. The “mere appearance” of power and equality is misleading and often an impediment to achieving real gender equality in the workplace.

Ameliorating this unconscious bias will take conscious and consistent effort. As women, we need to call out our supportive male colleagues when we see them talking one way, but acting another. All of this speaks to the continuing need for unconscious bias training and a lot of self-reflection—even (and perhaps especially) in organizations that outwardly seem to be making strides toward gender equality.

The second issue that often holds women back is uneven or inconsistent mentoring from other women. Women need to lean in, bring each other along, and sponsor other female talent. That’s what the fellas have been doing since the Stone Age—helping each other along and introducing the next generation of men to networks of other like-minded men. And yet women often (consciously and otherwise) fail to look for ways to help others who follow them succeed. It really does take a village for any individual to succeed. We should all help each other more.