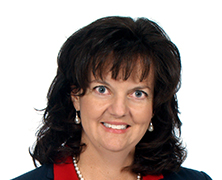 Deborah Gutierrez Schloss manages about $200 million in revenue as Regional Vice President of Operations with Sodexo, Inc., the world leader in quality of life services.

As an experienced operations executive serving the company’s Southwest market, she is responsible for health care operations in Texas, Oklahoma, and New Mexico. Schloss provides leadership to 200 managers and about 1,000 associates in a company with $9.2 billion in revenues that touches 75 million customers in 80 countries every day.

She’s known for bringing people together to solve complex health care delivery issues in a caring and collaborative atmosphere. Her colleagues say she has an inspiring approach for reducing complex issues into basic concepts. They also say she influences others to find meaning and purpose in their profession and directs them toward a path where passion and commitment evolve into outstanding leaders.

Schloss discovered her present career was what she wanted to do when she found herself making a difference in the lives of others. Much of what molds her into the professional she is comes from skills she inherited growing up in a large family. Nine brothers and sisters taught her negotiation tactics, her mother taught her about hard work, and her father instilled taking the time to celebrate life. She lives by the words family first and said her faith and spirituality are a daily reminder to treat each day as the last, and to make a difference in the lives of others.

Born in El Paso, Texas, and fluent in Spanish, Schloss is one of the founders of the employee business resource group for Latinos, Sodexo Organization of Latinos, and has served as its chair and executive advisor. She launched her career in late 1989 as a Registered Dietitian with Marriot Management Services (which ultimately merged with Sodexo) and has propelled into various senior level positions during her lengthy tenure with Sodexo.

Schloss holds a BA in human biology from Stanford University, a Master’s in nutrition from the University of Incarnate Word, and is a Registered Dietitian with the Academy of Nutrition and Dietetics.