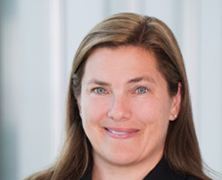 Influential trademark and copyright attorney Cynthia Johnson Walden works to help some of the largest companies in the world build value in the marketplace by protecting their names, trademarks and brands.

She initially came to the intellectual property law industry in a roundabout way. Just out of college, she was working as an assistant account executive at a major New York advertising agency, where she was accountable for obtaining legal approvals for commercials with in-house counsel and television networks. The inspiration from that role led her on a path to becoming one of the most influential trademark and copyright lawyers in the world.

As practice group leader of the trademark and copyright group at Fish & Richardson, Walden is the first woman to lead the group, overseeing all of the firm’s trademark and copyright matters. She says taking on the role was her biggest career leap. “At the time, I had two small children and a full plate, but I was eager for the opportunity and have grown and learned a lot through this role and the challenges and opportunities it has provided,” she said.

Under Walden’s leadership, the firm has consistently been ranked a Top Trademark Law Firm by World Trademark Review. Walden and her team help create value in some of the world’s biggest companies – including Bose, Proctor & Gamble, Gillette, 3M, Steinway & Sons, Honda, Ben & Jerry’s, Sabre, and Samsung – protecting their trademarks and brands.

Outside the office, Walden has actively participated in the International Trademark Association, including serving on various committees and playing an active role in conducting the INTA National Lefkowitz Moot Court Competition for the past 18 years. She’s also an advisory board member for the Women in Law Empowerment Forum.

Walden’s career advice to other women is to identify and cultivate relationships with mentors who can develop skills and perspective necessary for career advancement and goal achievement. She received her J.D. from Duke University School of Law and a B.A. from Dartmouth College.