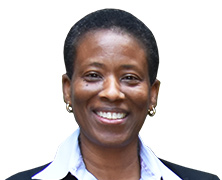 Be yourself, and always have the confidence to pursue your dreams!

Every Woman Needs a Senior Mentor

Many women have received the advice that, in order to advance their careers, they must work twice as hard as their male counterparts. However, following this adage does not always lead to senior positions and equal pay. Throughout my career in HR, I’ve seen that women who have strong advocates in the workplace not only grow, but are also empowered to reach back and pull others along with them.

I believe that every woman should have a senior mentor in the workplace who can act as a sounding board, help navigate potential professional pitfalls, and assist with earning the proverbial “seat at the table.” I was fortunate to find an advocate in Judy Smith, whose career was the inspiration for ABC’s hit show Scandal (2012–2018).

I first met Judy during my tenure at NBC, where she was the vice president of marketing and PR. I was relatively new to HR, and Judy was my client at the time. I was tasked with providing her with HR-related news so that she could control the external messaging. She quickly became my mentor. Over the years, she’s often shared her valuable perspective on what it’s like to be a woman—particularly an African American woman—in power, and how to set yourself up for success in industries that tend to be male-dominated.

Judy is far more than just a mentor, she was my sponsor. Sponsorship begins where mentorship ends. A mentor is someone who can give advice and guidance, but a sponsor actively helps promote a promising individual, even when he or she is not in the room. Judy not only gave me advice, but helped change the trajectory of my career by encouraging me to attend business school. She sponsored me by writing my business school recommendation, which gave me the confidence to further my education, which resulted in a step change in my career.

It is imperative that we, as women, do not see one another as competition, but rather as supporters. We are strong individually, but together, we can push each other to new heights. At FLEETCOR, I often tell my team to use their resources wisely. This includes cultivating meaningful, mutually beneficial relationships. The result is a culture of collaboration that ultimately yields productivity, increased recruitment and retention, a more profitable business, and a pathway for many to achieve their version of the American dream.