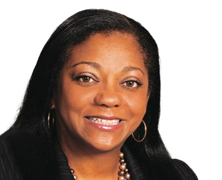 "When I Master Believing, I Master Life.”

Ask any successful leader how they got to their ideal position and most would say they had help. We reference bosses, mentors, role models, and, in some cases, someone who just opened a door to access key opportunities and decision makers to ensure our ideas are heard. If ideas are our most valuable commodity, then we have the ability to use those ideas to change the world – with help, that is!

As a senior executive in entertainment, former president of Women in Film, a current Managing Director at UBS and a mother of two, I personify the challenges inherent in navigating and transforming various roles. And yet, I didn’t achieve success alone. Along the path someone provided support and encouragement.

In one of my more high profile roles in entertainment, I launched our diversity strategy with oneon-one executive meetings. They were mostly men, mostly white and mostly white men who were content with the status quo. There were few outspoken critics; however, some displayed bravado, courage, fear, and even resistance. But what I had on my side was commitment from the top, a chairman who lived diversity in his everyday life. Having the chairman’s involvement and being able to demonstrate the business impact of the initiative ensured success.

As president of Women in Film, I recognized that entertainment and the media are a common thread that ties our world together. It’s the media’s willingness to push the envelope that produces brave and controversial programming that binds us together, regardless of race, gender, etc.

In family life, our children don’t mind sharing their mom. Even at their young age, they know that we all have important work to do to influence change and make a difference in our community.

I’ve spent my career creating a rainbow and eliminating the glass ceiling, making sure equal talent gets equal spotlight. Like the many who have helped me, I’ve been blessed with the ability to give back and mentor others through what can be an unfair process. So, as we continue to soar in our own careers, we all have the responsibility to mentor the generation behind us. It is their generation who have the potential to create an opportunity-filled world worth living in.