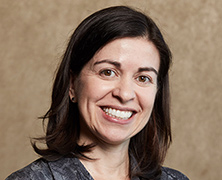 Always try to see the glass as half-full.

The Vanishing Half by Brit Bennett

From the ages of 12 to 18, I attended a Quaker school. Although I am not a Quaker myself, the values of Quakerism really resonated with me. Quakers believe in equality and fighting injustice; they were among the earliest and most vocal opponents of slavery and the unequal treatment of women. I wasn’t consciously aware of it at the time, but those values have stuck with me and shaped my career path.

I spent six years working as a prosecutor in the Civil Rights Division of the Department of Justice prosecuting civil rights crimes around the country. The bulk of the cases I prosecuted were police misconduct cases, where the perpetrators were incredibly powerful and the victims were often some of the most powerless in our society, including prisoners and undocumented immigrants. There’s an old joke that, because the defense doesn’t get to present evidence to a grand jury, a prosecutor can easily get an indictment—in fact, that a prosecutor could persuade a grand jury to “indict a ham sandwich.” That wasn’t necessarily true for the civil rights cases I prosecuted. With such powerful defendants, grand jurors often refused to indict. I had to constantly keep in mind the Quaker values I’d learned of fighting against injustice, even when it is hard.

As a prosecutor, I was outraged to find that many of the police misconduct cases I handled involved officers abusing their power to commit sexual assaults. Victims of crime often say that one of the worst parts is feeling like their power has been taken away. I spent countless numbers of hours with crime survivors and sexual assault survivors, preparing their cases. I gained a deep passion for victim advocacy work and for helping survivors to obtain justice and get their power back.

After leaving the Department of Justice, I joined Sanford Heisler Sharp, a civil-rights and social-justice law firm. There, I have helped to build the Criminal/Sexual Violence Practice Group, which represents crime victims in their civil suits. For me, it feels like a natural next chapter, where I still represent and fight for survivors of sexual assault and other crimes, and also continue to work on civil rights cases. I think the Quaker teachers I had in school would approve.