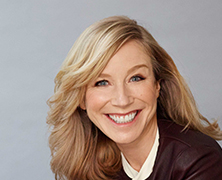 As a leader within one of the world’s most admired companies, The Walt Disney Company, Catherine Powell is widely respected both internally and within international communities.

Taking the reins this summer as Présidente of Euro Disney S.A.S., the management company of Disneyland Paris, Powell demonstrates boundless passion, energy and curiosity. Her colleagues say she is continually pushing boundaries and inspiring others to success.

Powell is an experienced Disney leader with over 12 years in global roles throughout Europe, the Middle East, Africa, and Asia-Pacific. Most recently, she was managing director in Australia and New Zealand (ANZ), driving extraordinary growth at Disney during her tenure and leading the region to be one of the company’s top performers among developed countries. In ANZ, she was accountable for driving the company’s strategy; coordinating, leading and expanding all company business divisions; overseeing Disney global franchises including Pixar, Princess, Marvel, and Star Wars; and seeking out new business opportunities in the region.

A key focus for Powell has been consumer engagement and creating innovative opportunities for fans to connect with Disney’s stories, characters and brands through both physical and digital experiences. She has led the development of multiple Disney consumer activations with organizations such as the Sydney Opera House, Royal Botanic Gardens in Sydney and Melbourne, The State Theatre, Tennis Australia, and the Australian Grand Prix Corporation. She was also elected to the Chief Executive Women in Australia and serves as a member of the Sydney Opera House Trust.

Earlier in her career, she led the Disney Media Distribution division in EMEA; served as Disney Media Distribution’s senior vice president, Sales – UK, Ireland, Nordic, Benelux and Israel; and prior to that, the executive director – Sales, UK and Ireland. Before joining Disney, Powell worked for BBC Worldwide for seven years, holding various senior TV sales roles across the Middle East and Europe.

During her career at Disney, her leadership has consistently inspired her teams to deliver results and initiatives that set new benchmarks for success. Powell is seen as a role model to many who have worked with her, and in particular, to other female leaders. “I think it is critical that female leaders have the ability to engage and empower women to believe in themselves and be great at what they do; and to have the qualities of positivity and optimism. Never be afraid of thinking differently and taking risks,” she said.