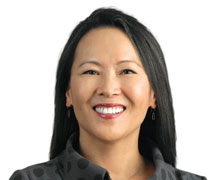 Life is difficult, but once you accept that it is not so difficult.

Packing for Mars: The Curious Science of Life in the Void, by Mary Roach; Lonesome Dove: A Novel, by Larry McMurtry

My path to leadership started in Korea, where I was born and raised until I was twelve. My parents knew they could not educate their four kids there, so they moved to rural Virginia in pursuit of the American dream. Not knowing any English, I began the fifth grade in America with a huge obstacle. My parents didn’t speak English either, so I became their translator.

Knowing that our parents sacrificed the comforts of their own country gave us the incentive to do our best, study, and assimilate, even when it was difficult. We benefited from the kindness of strangers, teachers, and neighbors. I always remembered that. I wanted to be in a situation where I, myself, could help others, too.

Another challenge was learning to navigate the corporate world. After law school, I realized that I, along with other women and minority lawyers, needed to adapt to a life that was very different from school life. As an associate at a large law firm, I realized that I needed to learn new skills and how to differentiate myself. Having a cultural upbringing in which we were told to work hard and keep our head down, I realized that I needed to learn new skills to succeed. So, I asked a partner to be a mentor. I watched and listened to how others spoke up, led, and promoted themselves. Slowly, I found my own voice and style.

This is my favorite kind of networking, where communal sharing of information, about oneself and one’s experience and expertise, helps us discover our common goals and, ultimately, help each other succeed.

My parents, who moved our family to the United States in the 1970s, taught me so much about how not to be afraid of taking risks.
My high school guidance counselor became personally involved with our family and our journey of assimilation.
Colleen Davies, Reed Smith’s global head of Legal Personnel, is truly a trailblazer and a great leader. She takes genuine interest in helping others, especially women lawyers, and she has the courage and business savvy to communicate a vision and leadership for everyone at the firm.

Take an interest in and learn from everyone you meet, many will inspire you and anyone could be a potential business contact or a friend. Find out what inspires them.