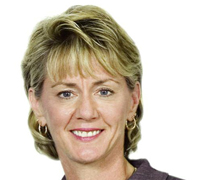 Go above and beyond in everything you do, for your people and your customers. Lead with passion.

Leading Change, by John P. Kotter; The Kite Runner, by Khaled Hosseini; and for my daughter, Queen Bees and Wannabes, by Rosalind Wiseman

I am often asked how I mapped out my career, as if there were a secret formula. The fact is, there is not. I have worked with some very successful women who carefully planned each career move. I had a different approach to becoming a chief information officer in a major corporation.

I chose Northrop Grumman 20 years ago because I believed in the company mission and its progressive ideas about growing their people. My career growth was based on passion and commitment, performance, a series of tough choices, influential mentoring, some old fashioned luck and being willing to risk.

Several philosophies have shaped my career and are concepts that I pass on to my teams:

MENTORING AND SELF-INSPECTION. I have had mentors who never told me what to do, but provided sound, compassionate and sometimes hard-to-hear advice. They provided counsel on tough decisions and encouraged me to assess the skills I needed to grow. A key lesson I learned was that as you move up, your strengths at a lower level can become a weakness at the next. You have to let go of some of the tasks and control that made you successful in the past, and step up to new roles—growing and trusting your team to perform.

PERFORMANCE. Performance is the greatest equalizer on an inherently unfair playing field. A talented and diligent worker will be noticed and rewarded.

TEAMS. A good leader builds cohesive teams and strong relationships. I strive to build an environment where a team will have a clear vision and mission, a passion for success and a culture of learning from each other. As leaders, we need to remove roadblocks and ensure recognition of the team’s success.

A few years ago I attended a seminar conducted by Jim Collins, author of Good to Great. I was influenced by his views on “Level 5 Leadership” and “getting the right people on the bus, and in the right seats.” The two key concepts are the “right people” and the “right seats.” By filling those seats with people who are complimentary, you ensure a blending of strengths. As leaders, our success is based on building and enabling our teams, and never forgetting to reward and say thank you.