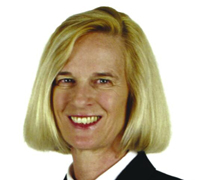 If you work hard, seek self improvement and ensure that those who work for you have the opportunity to develop, the rest will take care of itself.

Cobra II: The Inside Story of the Invasion and Occupation of Iraq, by Michael R. Gordon and Bernard E. Trainor; A Peace to End All Peace: Creating the Modern Middle East, 1914-1922, by David Fromkin

Any foundation dedicated to improving literacy around the world

When I was commissioned as an ensign in the U.S. Navy in 1977, I could not serve aboard ships or fly aircraft. That was considered combat duty, and women were not permitted assignment to such duty.

Now, 30 years later, I am the first female commander of a Combat Strike Group Forward deployed in Sasebo and Okinawa, Japan. I am responsible for the operations of eight ships and a range of exercises with nations in the Pacific theater. I also have been the commanding officer of two ships and held several commands ashore. These achievements were only possible because the Navy understands that every sailor has the potential to excel; and the Navy gives each sailor—as it gave me—the opportunity to prove it.

I react very strongly to claims that the military’s integration has hurt readiness. Nothing could be further from the truth. I am astounded daily at the quality and commitment of our service members. They work as a team; they ignore or mitigate obstacles that would crush most; and their race, color, religious creed and gender are transparent. These characteristics hold true for any business or profession that wants to be an employer of choice and set the standard in its industry.

The mentors I have had throughout my career are among the finest citizens of our nation. Their examples of setting career goals, continually seeking improvement, and using patience and a sense of humor as important leadership tools taught me much about how to succeed.

In turn I have mentored hundreds of young men and women, experiences at the foundation of my personal reward in service. I view mentoring as one of my most important responsibilities. I try to convey the many positives that accrue from a service ethos, whether someone is joining the military, the Peace Corps or a community or national service-based organization. Service teaches young people about leadership, discipline and those in the world who are less fortunate. Service teaches them how to invest in their future and their families’ futures and to mentor others to do the same. I believe service can reshape how young people decide to live their lives. It certainly did for me.