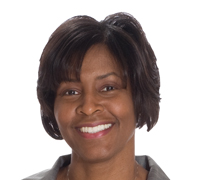 Reading, walking, traveling with my family.

Get involved! You learn so much by taking on new tasks in your professional and personal life.

Color Me Butterfly, by L.Y. Marlow; Basic Black: The Essential Guide for Getting Ahead at Work (and in Life), by Cathie Black

Being where I am today was not part of a well-thought-out plan. My career choice was the result of happenstance, but much of the success I have had results from great mentoring relationships that encouraged me to stretch professionally.

I went to a high school that focused on steering minorities to careers in science and engineering. I was encouraged to become an engineer because of my aptitude for math. My high school counselor (one of my first mentors) could not have been more thrilled that I chose to major in electrical engineering.

As a college junior, I had some reservations about an engineering career. At the encouragement of some graduating classmates (i.e., between class chatter in the student lounge), I decided to forego the traditional list of engineering recruiters and instead took a job as a patent examiner with the U.S. Patent and Trademark Office. The patent office was a great place for a freshly minted engineering graduate to work. I teamed with a senior examiner who was assigned to show me the ropes. Not only did he teach me the job, but he also helped me to understand the value of the mentoring relationship and its importance to job success. For a junior employee, I was good at my job.

I realized that the Patent Office was the breeding ground for patent lawyers, and I decided, “I can do that.” I left the patent office after a little more than a year to attend law school full-time to pursue a career as an intellectual property lawyer.

In a profession where minorities and women are woefully underrepresented, I have had the privilege of having many great mentors—most of whom did not look like me. While I may not have been their traditional pick for a protégée, my enthusiasm, willingness to listen, and generally upbeat attitude went a long way to bridging the gap and making the relationship work. I benefited (and continued to benefit) tremendously from the advice, direction, and opportunity that those relationships provided. I would encourage everyone to find someone who has achieved what you want, and ask that person for help.

As I move through this phase of my career and look forward to the next, I continue to seek out those who can provide guidance and encouragement so that my success in my “coincidental” career will be not be left to chance.