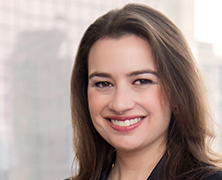 Blair Kaminsky knew being an attorney was her passion when she argued in court for the first time. “I always knew I would love the writing part of my job as a commercial litigator, but was not as sure about the oral advocacy component,” Kaminsky said. “I still have a lot to learn, but I now know I enjoy that piece too.”

Kaminsky joined Holwell Shuster & Goldberg LLP (HSG) in 2013 as an associate, and has represented multiple clients with founding partner Michael Shuster including HSBC and U.S. Bank. Her colleagues say she is brilliant, tough, ferociously hard working, and a collegial lawyer. They describe her as a born leader, highly popular with her contemporaries, who has successfully contributed to the firm.

Eight years removed from her graduation from Harvard Law School, where she was supervising editor of the Harvard Law Review and Alan Dershowitz’s teaching assistant, she has established herself as a leader among New York litigators.

Following a federal appellate clerkship, she initially worked with another firm litigating high profile cases in the financial market; including representing a major financial institution in litigation involving the Lehman Brothers bankruptcy, and NYSE-Euronext in litigation over a contemplated $10 billion merger that would have created the world’s largest stock market.

“It’s amazing how much I have learned by trying out work in different specialties, like joining a new case at the eleventh hour and finding that as much had already been done, I could still make a meaningful contribution,” she said.

Kaminsky describes her shift to the firm as her biggest career leap. “I still get to practice law at a very high level and work with incredibly talented colleagues and clients, but with the added bonus of helping build our now four-year-old firm from the ground up,” she said.

Kaminsky has led the design of the firm’s in-house training program and says the most important quality a woman leader should have is self-confidence. “Everything else flows from that,” she said. Kaminsky lives by the words “work hard and play hard.” She holds a B.A from the University of Pennsylvania and her J.D. from Harvard Law School.