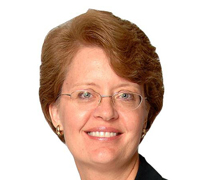 BA in mathematics, business minor from DePauw University; Master of Management in finance and marketing, from Kellogg School of Management, Northwestern University

If you stay in your comfort zone, you’ll never grow. New and exciting challenges often come at seemingly inconvenient times—nevertheless, embrace them.

File clerk in my doctor’s office

Big Brothers—Big Sisters and Girl Scouts (It’s all about mentoring!)

I am a big believer in mentoring. Throughout my life, I have had the good fortune to be mentored by a number of people who provided information and guidance, both personal and professional. In turn, I have served as a formal and informal mentor to a number of people, both inside and outside of TI.

Growing up in a small town in Illinois, I was raised to believe that I was capable of doing whatever I wanted to— regardless of whether I knew of anyone who had done it before. Whether as a high school foreign exchange student to Sri Lanka or as one of very few female math majors at my university, I became accustomed to being “one of the first” and learned to seek advice from others who had similar experiences.

Today, I find myself spending more time mentoring than being mentored. I encourage the people I mentor to think about their next two career moves. Often, people focus on their next job, but what about the one after that?

Consider making a lateral move if that position provides experience that enables you to ultimately get where you want to be. While I didn’t formally map out my career, I’ve made many deliberate decisions along the way—including at least two lateral moves that gave me experience that helped obtain subsequent promotions. I also encourage people to “bloom where you’re planted.” At times, you may find yourself in a role that isn’t quite what you wanted. Yet, one sure way to get noticed is to excel at whatever you are doing. So, despite your feelings about your current role, make the most of it.

And, finally, communicate! communicate! communicate! In my case, I had consistently talked about wanting an international business assignment. When one came open in Taipei, Taiwan, it seemed natural for management to ask if I was interested. It was natural to ask because of my expressed interest in such a role, but it was not necessarily natural considering I was pregnant at the time!

Lacking other information, well-intentioned people often make judgments based on what they think you want in your career. Be certain they’ve heard what you want directly from you and you’ll find you’re better able to steer your career in the direction you want it to go.