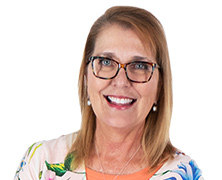 Start each day With A Grateful Heart.

Imagine It Forward by Beth Comstock

Six years ago, I had an “aha” moment. For all my career success, I realized that I was so focused on the here and now I had not noticed that I was the lone woman in the executive ranks at Jabil. I also suddenly realized I could help others. The task was daunting, given that Jabil has 200,000 globally dispersed employees, but my commitment to help women trumped my trepidation.

My mission: Inspire, elevate visibility, and empower Jabil’s female workforce in our male-dominated global manufacturing industry. It was a considerable challenge, given dramatic cultural differences across the 30+ counties in which Jabil operates. I had to create a program that would grow from the bottom up because I had no budget and zero staff dedicated to the mission.

Success did not happen overnight, but day-by-day, event-by-event, leader by-leader I was able to bring colleagues on board. I had AMAZING support from leadership, including our passionate CEO, Mark Mondello, who is extremely visible and vocal with his support.

Always a fan of alliteration, I named the program Jabil Joules (a joule is a unit of energy and pronounced “jewel”). And I based the program on four principals:

In the last 18 months, I’ve worked with local steering committees to hold ten events in China, Hungary, Mexico, Ukraine, and the United States. Being on the ground is critical to understanding country-by-country cultural issues and building a sense of excitement and enthusiasm. Senior leadership has embraced these events, and many have traveled halfway around the world to participate.

Jabil Joules appears unstoppable. And for me, the time and commitment it took to get here is every bit as rewarding as the momentum we built along the way.