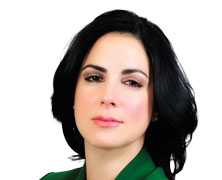 I can do all things through Christ who strengthens me.

I was three years old when my family immigrated to the United States from Cuba. My parents gave up the life they knew and country that had been their home for the promise of hope in a foreign land. They knew that the sacrifices they were making weren’t really for them, but for their children. They wanted me and my brother to have the freedom to express ourselves, to form our own opinions, and to follow our dreams. They knew that in Cuba, under a dictator, that would never happen.

My grandmother, Caridad Veliz, who also immigrated with us, instilled values in me that I will carry forever. One of those values was the appreciation of education. As an orphan, she couldn’t go to school because she had to work as a maid to survive. She longed for an education until the day she died.

Her experiences and my parents’ sacrifices ignited my desire to go to college. I wanted to be someone, to do something, and to give back to the country that had given me so much.

College degrees are costly and require a lot of commitment, but they pay dividends for a lifetime. In a competitive job market, only having a high school diploma makes it tougher to climb the career ladder. It’s not so much the piece of paper, but the experiences gained, the knowledge acquired, and the character developed that better prepares college graduates to compete in today’s workforce.

For me, going to college was an easy decision to make but a harder reality to make happen. I worked full-time while I was a student. I didn’t have the traditional college experience and years later, I’m still paying for my student loans—but I wouldn’t change a thing. Those experiences made my college degree more valuable, not less.

Today, I am proud to serve as the press secretary of a federal law enforcement agency charged with protecting America and all that it stands for—a job that is deeply meaningful to me and my family.

To anyone wondering whether or not a college education is worth fighting for: it is. Investing in a degree is a promise to yourself—and to those that helped you along the way—that the journey to your dreams may be a long one, but you’ll get there one day.