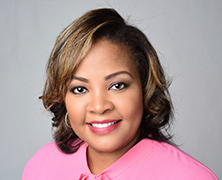 Don’t pursue perfection, pursue excellence. Pursuing perfection only ends in frustration and disappointment. Pursuing excellence is attainable if you’re willing to put in the work.

Besides babysitting, it was working as a cashier at Six Flags Over Georgia

Surround Yourself with Supportive People … and Say Yes

If you ask women at what point in their career they had a fear of failing, you will get a host of answers. For some, it may have been the very first day at their first job out of college, while, for others, it may have been the day they decided to start their own business. For me, it was when I was asked by Aflac CEO Dan Amos to leave the Legal division and head up Human Resources.

Since graduating from law school, I had been focused on practicing law, so the thought of taking over an entire division for which I didn’t have comprehensive knowledge was daunting. It turned out to be the best career investment I ever could have made. I learned so much about the business, the different divisions, and how to manage people, projects, and even profit and loss statements. The faith Dan placed in me was all I needed to take on this challenge and succeed.

A few years ago, I returned to the legal environment as Aflac’s general counsel. Since then, I have realized how much the HR experience helped me become a better leader, conducting the business of the office of general counsel from a more rounded perspective. I learned so much about the nuances and intricacies of Aflac and the insurance industry, which I never would have learned without taking on that challenging new role.

One of the key reasons I believe I excelled in the HR role was the support I received from fellow colleagues and Dan himself. It’s important to make sure you surround yourself with people who will be supportive of you and provide an encouraging environment. No one can be perfect, and if you constantly worry that one mistake might stop you in your tracks, you will never get the opportunity to spread your wings and flourish.

Women need to reject the “impostor syndrome” that leads many to believe they don’t deserve to be successful. Instead, we must be willing to take on new challenges and roles, and accept that sometimes the best lessons are learned from what we deem a “failure.”