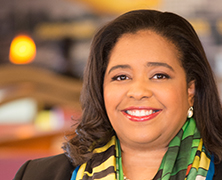 As director of diversity affairs and multicultural engagement at Denny’s restaurants, April Kelly-Drummond has spent two decades promoting and standing proud for a diverse, inclusive workforce.

Her colleagues say she is tireless in her efforts to bring all people together to create an environment of respect. Drummond joined Denny’s in the early 1990’s and worked her way through the ranks while continuing her education and remaining active with numerous community and local service organizations. The company says her work has been invaluable and has been acknowledged in the book The Denny’s Story: How a Company in Crisis Resurrected Its Good Name and Reputation.

Along her career path, Drummond describes her move from a coordinator to a manager as her biggest career leap. “It was instrumental in helping me grow and think more strategically, as well as putting me on the path to where I am today,” she said. She believes trustworthiness is essential for female leadership. “If your team doesn’t trust you, it doesn’t matter how competent and driven you are as a female leader,” she said. “Let your smile change the world, but don’t let the world change your smile.”

Drummond works with communities and organizations in her initiatives to advance diversity and inclusion. Earlier this year she worked with the College of Charleston’s School of Professional Studies to launch a conference, Advancing Diversity and Inclusion: Building Successful Organizations and Communities. The initiative was aimed at advancing the conversation of diversity and inclusion in the community by bringing together more than 100 business leaders, educators, elected officials, and community leaders.

Drummond has received many accolades for her work, including recognition among Savoy Magazine’s Top 100 Influential Women in Corporate America and Minority Advocate of the Year by Asian Enterprise Magazine. She is a board member for Big Brothers Big Sisters of the Upstate South Carolina chapter and the NAACP Florida State conference. She holds a B.A. in professional studies from the College of Charleston.

Words she lives by: “Stay true to yourself and never compromise your values or integrity. Pride yourself on always doing the right thing, even when you think no one is watching.”