Director of Talent, Culture and Engagement 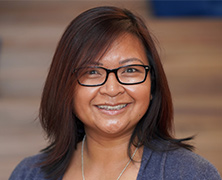 If you always agree with your boss then one of you is not needed.

I worked in the very first pho shop in Seattle.

I am on the Board for OneOC, which means I don’t have to pick one! I get to work with all the nonprofits in Orange County. It’s the best of both worlds.

I Would Not Trade My Failures for Anything

The dictionary defines “failure” as “lack of success; a defeat.” If you look at my life, I’ve been through my share of those experiences.

During my second year at the University of Washington, I had to withdraw from school due to an unforeseen family hardship; I worked two restaurant jobs to support my family. In 2008, I suffered a brain aneurysm and found the strength—physically, spiritually and emotionally—to survive. After 23 years, my first marriage ended in a painful divorce. And, throughout my working life, I’ve lost more jobs than I care to mention.

From these experiences, I’ve gained resilience, empathy, and perspective that I wouldn’t trade for anything. When you almost lose everything, you realize how precious life is and what you want out of it. You fight to create the world you want and surround yourself with people who lift you up and encourage you every day. You realize that success is defined by you—and only you.

As a working mother, I’ve often felt guilty after leaving my kids at daycare. I’d occasionally sob my way to work, thinking I may be the worst mom in the world. At the end of the day, while they were getting their baths, I would clean the house and fix dinner. My kids, who wanted my complete attention, would ask, “Why are you cleaning?” And I would reply in a tired, but undefeated voice, “Because someone has to do it.” While this time could have led me to feel like a failure, it was, instead, an opportunity to appreciate accomplishment in the face of adversity.

I’ve also learned that without failure or setbacks, I would not have tried new things. If I had not been unhappy in my job, would I have opened my own business? If I had not suffered a brain aneurysm, would I have been motivated to enter and complete a marathon—and nearly 50 half-marathons—or become a triathlon coach?

(By the way, when my neurosurgeon repaired my aneurysm, my only regret is that he didn’t implant a chip that enabled me to play the piano, create intricate algorithms, and speak numerous languages. Or, at least, paint within the lines—on occasion.)

So yes, I would not trade my failures for anything. Out of these failures have come successes. You need to be patient with yourself, find your definition of success, and not let anyone else define it for you.