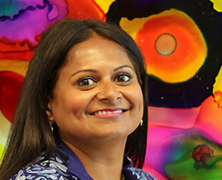 Annapoorni “Anna” Sankaran is a talented commercial and bankruptcy litigator and a successful business developer who works tirelessly to improve diversity across the legal profession.

Sankaran knew she wanted to become a lawyer in the eighth grade. Surprisingly, her passion for math led her to love law. “Like math, tacking a legal problem requires similar intellectual rigor and keen strategy, which I relish,” she said. “Solutions come from working with a team. I enjoy the collaborative nature of practicing law; working with talented bright people raises my game.”

Sankaran is a shareholder at Greenberg Traurig, LLP (GT), where she’s spent the past 15 years. She joined the Boston office in 2001 as an associate and in 2006 became the first South Asian woman to be named partner at a major Boston law firm.

Sankaran is the first South Asian member of the board of directors of the State Bar of Texas. She has been a leader in local minority bar organizations and has served as president of the national South Asian Bar Association, whose Greater Boston unit established the annual Annapoorni R. Sankaran Award for Excellence in Leadership and Service. For Sankaran, mentoring is a personal and one-on-one way to make a difference.

She currently serves as mentor for a number of associates in the firm and says being a woman in the legal profession has been inspiring and rewarding. “Not only have I had the opportunity to learn from accomplished women who achieved before me, but I also have the opportunity to make a difference for someone else,” Sankaran said.