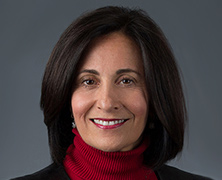 Just moved to a lake house so anything outside—fishing, paddling, gardening.

Pray for health, strength, and patience; with those three you can accomplish anything.

Fire and Fury by Michael Wolff

Clerk at a variety store

Perseverance Pulled Me Through

Perseverance. As I was reflecting on my career choice and what career advice I could give to those facing similar decisions in these uncertain times, that word kept popping up. From the time I was 10 years old, I always wanted to be a lawyer. It was a strange choice for a daughter of two Italian immigrants who never finished middle school, let alone college. I did not know any lawyers, except for those I saw on television. In school, I found I had an affinity with the written and spoken word, and loved the art of persuasion. My parents valued education, but felt being a hairdresser was an appropriate profession for a girl “who was going to get married and have kids.”

I had other ideas.

I decided to go to college while working in a hardware store, so I could graduate debt-free. Through hard work and perseverance, I graduated and started working for the U.S. General Accounting Office doing program evaluation for the U.S. Congress. It was a great job that allowed me to travel and sharpen my analytical and writing skills. In my spare time, I got married and had two children. I continued to work full-time and, even though I was promoted each year, I still wanted to go to law school. I took the LSAT and applied.

I started law school in August 1988 and shortly thereafter realized I was pregnant. I generally feel better when I am pregnant, so I thought it was no big deal. Baby in March, finals in April—it would all work out. And it would have if that was all that happened. Unfortunately, our 7-year-old son was stricken with kidney disease and went into renal failure two weeks before our daughter was born. He needed constant hospital care. With two other children and law school finals looming, I went to the guidance office for advice. I was told by my female counselor that law school grades are important and that I should quit! I was devastated. However with the encouragement of other professors, I decided to persevere and take my finals.

I made it through and started back to school in the fall, but had to stop because our son needed a kidney transplant. He received his dad’s kidney in November of 1989, but complications kept him hospitalized till March. In the meantime, I continued a few classes and finally returned to school full-time in 1991. I graduated in 1992 and landed a job with the then largest law firm in Michigan—perseverance pulled me through.

Lesson Learned: You never know what life will throw at you. But with perseverance, any goal is achievable!