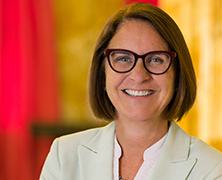 For the President of this University, Women’s Issues Are a Top Priority

President of Mount Saint Mary’s University (the only women’s university in Los Angeles), Dr. Ann McElaney-Johnson is recognized as a thought leader for women’s issues and a champion for innovative teaching and learning. Her leadership style is inclusive and collaborative, and her strategic vision for the university is to foster a culture of innovation and excellence that will prepare students to pursue successful lives filled with purpose.

Ann launched the Center for the Advancement of Women at Mount Saint Mary’s University to expand the university’s international presence by partnering with other universities, recruiting and retaining outstanding and diverse students, and expanding academic offerings. In 2011, Ann led the creation of the Report on the Status of Women and Girls in California™, the first comprehensive report of its kind to examine gender gaps in the state, and provide recommendations and resources to legislators, nonprofit leaders, and community advocates.

Past winner of the YWCA Woman of Vision award and Alston & Bird’s Women of Distinction award, Ann is a member of the advisory board for the Women in Public Service Project at the Woodrow Wilson International Center for Scholars, the Advisory Council of the Geena Davis Institute on Gender in Media, the board of directors for the Association of Catholic Colleges and Universities (ACCU), the board of trustees for the College of the Holy Cross, and the board of the Women’s College Coalition, among others.

“Being a woman in my profession has been incredibly gratifying and empowering since senior administrative positions in higher education have traditionally been filled by men,” said Ann. “The increasing number of women in my field has brought new perspectives and approaches to higher education leadership. As women, we are able to be visible role models to those coming through the ranks.”

Ann earned her PhD at University of Wisconsin–Madison, her master’s degree at Middlebury College in Vermont, and her bachelor’s degree at the College of the Holy Cross in Massachusetts.