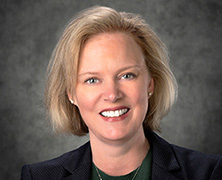 Cooking, and spending times with friends and family

My first “real” job was as an auditor with Ernst & Young.

Speak Up and Push the Bias Out

When I first began my professional career in the early 1990s, I struggled with many of the typical insecurities women often have in a predominately male world. Gender equality in the workplace was a fairly new concept that the men with whom I worked were trying to grapple with. They most certainly had biases, even though they didn’t necessarily understand or know it. I was often told I was an asset to the organization because I “captured the attention of the audience when I walked into the room.” That comment, while meant to be flattering, spoke nothing about what I brought to the table from an intellectual or professional standpoint. I specifically remember being told that I should make sure to smile during a meeting. That still stings. The focus was more about what was on my face, not what was in my brain.

Luckily, I was able to overcome their bias, or perhaps just persevere. I would not allow myself to accept it. I was lucky enough to have confidence in my abilities to speak up against it. I used it to fuel my drive and determination.

The tide has shifted, albeit slightly, since I began my career journey 30 years ago. My advice to women working their way up in any profession is simple: Speak up. Ask for what you want. Don’t assume others will offer it to you. If you want a promotion and have performed well in your role, tell someone. And if you don’t get it, ask why. Then work hard to address the feedback and ask again. The more women feel comfortable pushing the bias—whether unconscious or overt—out, and speaking up for themselves, the more women we will see leading companies, sitting at top positions in our government, and changing our world.