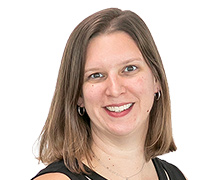 Do not let others define you, especially what success looks like to you.

Babysitting; first job with a W2, front desk clerk at a hotel in the Catskills

You Can Engineer a Great Career

Not every engineering class, project, or construction trailer meeting was easy, but it never deterred me. At one of my first jobs out of college, I was told on numerous occasions I was too young, women were not supposed to be in construction, and I would never succeed in the AEC (architecture, engineering, and construction) world. I’d say that I have proved the naysayers wrong, and I have succeeded by finding my own voice and my own path. After all, I was told from a very young age that I could be anything I wanted when I grew up!

I have been fortunate to have several female role models in my career. Each has provided me with different skills and no two have been alike. They have made me a better people manager and project manager through lessons of hard work, dedication, empathy, perseverance, and sometimes even failure. They took the time and guided me, but also expected me to put in the effort for every project, every promotion, and every role I have earned.

I’d be remiss if I didn’t mention that some of my biggest supporters have been male senior leaders. I am currently a senior leader at GEI, and I think it’s just as important to show young women, as well as young men, strong female leaders. We must all work together toward common workplace goals and career growth. Diverse teams generate leaders with the qualities you want to exemplify—dedication, hard work, and trustworthiness.

I believe it’s important to have female role models so younger colleagues, regardless of gender, can envision themselves as engineers, construction managers, and scientists. We must continue to empower the next generation to grow into the leaders of tomorrow! We can succeed and excel on the roads that have been less traveled, but we have to choose to take those roads. We must believe in ourselves, create our own individual paths, strive for those goals and leadership positions that we think are out of reach, and most important, empower each other, no matter the obstacles.

Bumps along the way only make us better. We must be strong, dedicated, and compassionate mentors to lead the next generation to their greatest potential, just as my role models prepared me and are still guiding me. Promoting diversity in leadership roles is vital to workplace growth and success. I am proud to play my part.