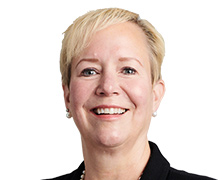 Be kind. Do what is right and stand behind it—firmly, but courteously. Challenge the wrongs you see; otherwise, you are complicit.

Ladies Who Punch: The Explosive Inside Story of “The View” by Ramin Setoodeh

Greater Cleveland Food Bank and the Cleveland Orchestra. One feeds the body and the other the soul. Both help to make Cleveland the special place it is.

If We Want Parity, We Must Stand Together

Long ago when I was quite young, there was an effort to pass the Equal Rights Amendment (the ERA), which would have guaranteed women in the United States parity with men in all essential regards. It failed, not because of a lack of support from men in power, but due to opposition from a groundswell of conservative female voices like that of Phyllis Schlafly. Stated fears included that housewives would be disadvantaged, women would be subject to the draft, women would lose the right to alimony, and mothers would lose the presumption of custody in divorce cases.

Pay inequity seems to be an intractable issue in this country. One of the reasons for that is the infinite variety of bases presented to justify such a blatantly unfair result. But another insidious basis for this ongoing economic discrimination is the inability of women to truly unite as a group behind simple principles that are clearly in their own and their daughters’ best interests. I am always troubled when women hesitate to stand up for themselves and other women.

There are many reasons why women are less highly remunerated than men for the same or equivalent work. But for me, the most frustrating aspect to the issue is women’s consistent failure to pull together and force change. Until we all row with the same oar, not only will the poor always be with us, but underpaid women will staff positions all over the country.