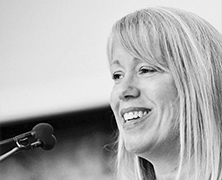 “The world is changed by your example, not by your opinion.” –Paul Coehlo

Hood Feminism: Notes by Women that a Movement Forgot by Mikki Kendall

Working in a fast food restaurant at age 13

When I was young, I never wanted to be a leader. When I thought of leaders, I thought of people who were very serious, often male or with masculine traits, economical with words, and lacking emotion. I was none of those things—I was passionate, abundant with words, and completely lacking a poker face.

It wasn’t until years later, when I faced an incredible challenge, that I learned what inclusive leadership looks like. In 2009, after stepping onto a stage at a bank in London, I froze. After I said welcome, everything I had prepared to say left my head. I had to exit the stage in a walk of shame.

The next day I tried to resign. I thought I would make it easy for my manager. I was clearly not right for the role. She declined, and told me something I will never forget. She said, “I see something in you that you cannot yet see.” I thought she was crazy. I decided to stay, but only with the understanding that I would never have to get on a stage again. She agreed as long as I sought help to heal the traumatic experience.

For two and a half years, I avoided the stage and went to a somatic fear coach, speech coach, holistic therapists, and healers—I even joined a private support group for people who had fears. When I began again to speak to groups, it was terrifying but my passion for diversity and inclusion overrode my fear.

Everything changed in 2014. While speaking to a group of engineering students in Sweden, all of the fear left my body. I began to speak everywhere and to anyone who would have me.

I also began to see that leadership comes in all shapes and sizes. I’ve had many managers since I was young. Some have been amazing and inspiring, and others, not so much. However, from every single one, I’ve learned something. I began to emulate the behaviors I admired and discard the behaviors I did not. I began to see the potential in others, despite what they saw or what belief held them back. I learned that what we perceive as a weakness might, in time, actually be a strength. I also learned that leaders are human. I don’t always get it right, but I’ve learned that making mistakes is part and parcel of growing, and that we’re always learning. I believe the greatest growth often happens, not when we get everything right, but rather when we mess up, and we see a better way to do something. When we allow others to see our humanity, we give them permission to show theirs.