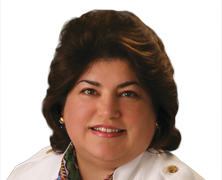 The best time of my life starts today.

A Song of Ice and Fire, by George R.R. Martin

“The story of my life is so rich, I have to tell it in snippets,” I said to my boss a few months ago. He knew I was born in Cuba and raised in Venezuela. But even after two years of working together, he was surprised to find I learned my English in Baton Rouge, where my parents attended LSU for graduate school. I was eight years old. An Alabama native, he laughed as I said with a southern twang, “If I wanted, I could speak just like you!”

On the surface, this revelation into my past seems unremarkable. Yet, it brought us closer by strengthening a common ground for collaboration and trust—two of the most important elements of what I refer to as leading by influence.

Early in my career I learned that leading by influence was a necessary skill to drive large-scale projects where your team members reported to others. Siemens, a large global engineering and technology company that manufacturers everything from turbines to hearing aids, afforded me ample opportunities to develop in this area. I experienced firsthand why establishing common objectives with others was so critical to the kind of collaboration that meant the difference between a good outcome and a stellar one.

Trust would come later—but only after I showed dedication and integrity, and demanded the same from others. I understood that once trust is earned, employees feel confident they’re part of a winning team that is highly regarded and respected. Collaboration and trust are thus the foundation of leading by influence. These learnings remain equally relevant today, now that I lead a team of thirty talented professionals.

Leading by influence is critical to persuade, build consensus, and create direction among teams. In its most evolved form, it becomes embedded into your communication message and style, and even your body language. Learning and developing this skill helped me—an engineer by trade—realize that marketing was my true passion.

I practice influencing every day. My job is to influence our company’s decision makers to prioritize the requirements of the U.S. market; influence hearing care professionals to prefer and dispense our hearing aid products; and influence the growing hearing impaired population to consider the Siemens brand.

Staying competitive requires knowledge of your audience and industry. Anticipating the requirements of healthcare professionals so they remain competitive and understanding the motivations and expectations of the end user are critical. Developing new digital and social media channels has also helped us build a younger and broader constituency.

My grandmother, who will be one hundred this year. Fiercely independent, she had a distinguished career at a time when most women could not. She taught me that education and dedication are the foundation of a rewarding career.

Know what you want and work for it. Enlist mentors and take time to network. Make your career aspirations known to influencers and advocates early and often.