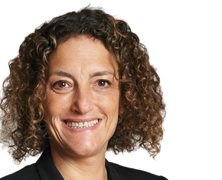 All descriptions of reality are a temporary hypothesis. Everything we do matters – immensely.

1491: New Revelations of the Americas Before Columbus, by Charles C. Mann

Growing up in New York City I was a movie freak. I saw every movie that came out in the theaters and watched anything and everything on TV, from 1930’s comedies to B-movie science fiction, WWII dramas to romantic epics. It all seemed like something magic that happened in a fantasy place far away from the real world. So when I stop to think that I have now been making movies for the past 20 years, overseeing and producing films that have been seen by millions of people all over the world, working with many of my idols and heroes, I have to pinch myself. It is truly extraordinary.

If I were to give any single piece of advice to young women who are aspiring to a professional or artistic goal today, it is this…dream. If I had stopped to think at the time that I first moved to Hollywood with a credit card and a rental car, or applied for a job at the Walt Disney Company in the wrong clothes, I might have lacked the courage. Luckily I was more afraid of how I would feel if I didn’t try than of how I would feel if I failed. If you can imagine it, go for it.

I find that many talented women come to a point where they feel that they have to make a choice between a meaningful career and having a home life and a family. I not only don’t believe that to be the case, I believe that our world depends on women and mothers sticking it out in every area of endeavor and especially in the arts. Coming up in Hollywood as a studio executive I encountered all kinds of minor gender bias. Not the big dramatic issues like sexual harassment, but more subtle and unintentional ones, like wanting to take a female character in a story and make her male for casting purposes. Or forgetting to give a female character a reasonable job or point of view. I think those messages we send are powerful in ways we sometimes don’t realize. I always feel satisfaction when I know that I brought more balance or inspiration to the view of the world expressed in the movies I work on.

For me one of the most exciting aspects of making animated movies is that they are only limited by the breadth of one’s imagination. I have the amazing good fortune to be surrounded by brilliant and passionate artists and technologists who can bring any idea to life. They are the living embodiment of my most dearly held belief – if you can imagine it, then you can make it happen.