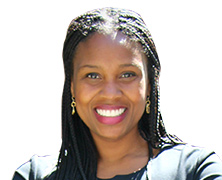 Find a reason to laugh every single day. (Fortunately, my family makes that very easy.)

When Life Gives You Lululemons by Lauren Weisberger

Making pizzas and “grinders” at a deli in my hometown of Jackson, Michigan

Comfort Cases, based in the Washington, D.C.-area, whose mission is to bring dignity and hope to youth in foster care.

Having Role Models Is Huge

My mother was my first powerful female role model. Her early example of professional excellence and self-advocacy had a tremendous impact on my professional career. She spent the majority of her career in male-dominated engineering environments, where she was very often the only woman and the only African-American. I have been inspired and empowered by her personal courage to demand her well-deserved seat at tables of power, her unapologetic appeals for pay equity because she absolutely deserved it, and her constant words of encouragement when I chose to pursue a degree in mathematics and ultimately became an intellectual property litigator, neither of which are fields historically dominated by women.

While my mother’s early example continues to influence me, over the course of my career as an attorney, I have been very fortunate to have a number of powerful female role models, both at the senior associate and partner level, whose self-confidence, leadership, and accomplishments have motivated and empowered me, and whose intentional mentorship has played a large role in my professional growth and development. By their example, I have learned not to hesitate to ask for the professional experiences I want to have, that there is not just one path to success (however you choose to define it), and that promoting and mentoring other women is always a part of the job. I am forever grateful for these incredibly dynamic and generous women.

Unfortunately, finding powerful female role models in law firms, especially women of color, has not always been easy, given the shortage of women in the senior ranks of many law firms. That said, in my experience I have found that where these women do exist, they are a mighty force. And often, what makes them powerful is not only their own professional successes (which are certainly admirable), but their clear and unabashed commitment to promoting others, especially women and minorities. It is an example I hope to emulate.