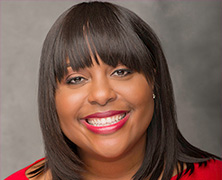 If you know your worth, you will never negotiate against yourself.

The Nickel Boys by Colson Whitehead

Be Willing to Redefine Success

After my infant daughter died in 2010, I received a magnet in the mail from my former supervising partner. Quoting Winston Churchill, the magnet said, “If you’re going through hell, keep going.” I have lived by those words ever since.

The loss of a child is an unimaginable grief that continues to shape my life.

I was forced to find a way to live after a piece of me had died. I stayed home for three years as my husband and I mourned, expanding my family with the birth of two beautiful sons. I planned to return to work in 2014, but after a series of telephone interviews with various law firms, the managing partner of a firm said, “I know your former firm and you have great experience, but you have not worked for three years and in this economy, law firms may not be sure how to assess your skill level.”

I thanked him for his time and started my firm that day.

It was never my desire to manage my own law firm. I believed strongly that making partner at a firm was an attorney’s leading metric of success. But when wariness about my competency arose as a direct result of the time I took to mourn my loss and have my sons, I took the advice I would have given my daughter and the advice I have given to countless women since:“Do not let anyone or any circumstance define or limit you.”

Not long after, I had as much work as I could handle. Within three months I co-chaired a securities arbitration. One year later, I second-chaired what was my fifth jury trial. Three years later, we welcomed another daughter. Now, six years later, I manage a thriving workplace and campus investigations firm. I love what I do.

I continue to honor my older daughter’s memory as a member of Cedars-Sinai’s Neonatal Intensive Care Unit Family Council, where I help support families with babies in the NICU and families who have experienced loss.

My journey, both personally and professionally, is a call to action to women: (1) Be willing to redefine success; (2) Chart your own course and break barriers along the way; (3) Do not be afraid to lead; (4) No matter how many times you fall down, get back up and keep going. You’ve got this.